If you ever find yourself lost, do you have any idea how to get a hold of your bearings?  This isn't an exhaustive methodology but some of these tips will at least help you get an idea of where you are?

First of all you need to understand the points on a compass are like a clock. North is similar to 12 o'clock, East is similar to 3 o'clock, South relates to 6 o'clock and West relates to 9 o'clock. If that doesn't make sense, then look at the image above and imagine a clock on top of it.

And no matter where you are on the planet, there is one fact that will help you.

The Sun Rises in the East and Sets in the West.

We all (hopefully) know that the Earth rotates or spins on its axis.  Well, because the earth spins to the east (moves right), the sun will always rise in the east and set in the west.  That means that as the day ticks on by minute to minute, hour by hour, the Earth is moving to the right and so as that happens, the Sun moves to the west (or the left).

Keeping that in mind, if you observe an object in the sun, you can use the object's shadow to get an idea of which way is east.  An object that casts a shadow because of the sun will move in the opposite direction that the sun moves.  So as the sun moves west, then the objects shadow will move east.

For more help in using this type of shadow method check out: “How to Find True North.”

You Ought To Know: How to find East no matter where you are. 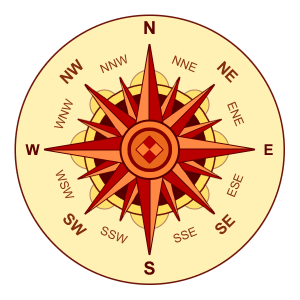