I started writing this post on the plane on my way back home trying to wrap my head around everything that happened this weekend. Here’s what I know without a doubt. That comic-con exceeded my expectations and that this weekend was EPIC.

The whole weekend surpassed my expectations. Comic-con is what you make of it and every day had me happy, excited, and exhausted by the end of it.  I have to thank my girl Pauline for taking me in this weekend and showing me the awesomeness that is SDCC.

As I may have heard, I was only able to get tickets for Thursday and Sunday, which means I would need to volunteer to work at SDCC in order to get into SDCC the other days. Friday was pretty much Haven day, but I'll be discussing that on revisitinghaven.com so I won't bore you here with that. But if you want to hear about the incredible time I had meeting the folks who make my favorite show happen, you should check it out. If Friday was Haven day, that meant Saturday was for volunteering. Volunteering means that you promise to work a 3 hour shift at some point during the day doing whatever job you are assigned. I'll get more into this later.

The people who came to comic-con were both young and old, any ethnicity you could think of was present, and you had people both dressed in costume and those who weren't. I myself was not in a costume but I did wear my superhero shirts. Folks took their costumes to varying levels of detail. Some people have been working on their costumes for months! I'll sprinkle images from the weekend throughout so you can see the various levels of creativity people had.

There were well over 130,000 people at comic-con this year and there were activities not only at the Convention Center but also at the Mariott, the Hyatt, the Gaslamp District, Nerd HQ, and the surrounding areas. At any given moment, there is something going on.  Comic-con can really be separated into two parts, entertainment and comic books. Originally, comic-con was more about comic books than entertainment but today, it seems to be roughly 50/50.  Studios tend to send their more popular shows for the fans but they also reveal never-seen-before footage and trailers.  This year, Lionsgate revealed the teaser trailer to Hunger Games: Mockingjay Part I, DC comics shared a teaser clip of Superman v. Batman, and Marvel shared footage of the upcoming Ant-Man and Avengers: Age of Ultron movie.  The clips from DC and Marvel were not shared with the public nor with comic-con attendees who were not present in Hall H. Watching the footage is a treat and reward only for those who made it into the coveted room.

Back of the line for Hall H. This line wrapped around the building and snaked its way between tents. Photo Credit: Aimee J.

Hall H is the main and biggest room for SDCC  and once you're in, you're in. The room is not cleared between panels so you can stay all day after you're seated.  Which is what many fans do because they camped out for over 15 hours (overnight!) to make sure they can get into the room the next day. Keep in mind, that if you are in line for Hall H (or even the 2nd largest room, Ballroom 20), you are missing out on all of the other panels and exhibits because you are waiting in line. And that is okay for a lot of fans because they came to comic-con with a plan and a specific panel to see. This being my first comic-con, I did not want to miss out on anything so I opted out of Hall H but I did see the Hannibal panel held in Ballroom 20. 🙂

The thing that impressed me the most about comic-con is that there is this positive energy that surrounds comic-con. You are surrounded by hundreds of people who are just happy and excited. You only really heard people speak highly of the costumes they saw on the people around them. How can you be negative when you see little boys and girls dressed up as Spiderman/Spidergirl, Superman/Supergirl, Batman/Batgirl, Mario, or Luigi? The positivity is infectious. I think what I enjoyed most was when I saw families dressed up together. Batman's family was there!! In a world where there is so much negativity, it was nice to escape for a little while. 🙂

Yes, I am volunteering to hold a sign to direct volunteers. Photo Credit: Aimee J

With over 130,000 people in attendance, can someone name a larger convention to ever take place? I have to give Kudos out to Comic-Con International (CCI) for their amazing job in organizing such a large affair. Aside from the many staff members and contracted staffing working the convention, you have hundreds of volunteers helping out. If you want to volunteer to work for the comic-con you have to register months before tickets go on sale and not everyone will make the volunteer list. Similar to buying a ticket for comic-con, on the day of volunteer registration, you are put in a queue and have to hope you're lucky enough to make it to the front of the line to get in before they cut off registration.

Like I wrote earlier, if you volunteer, you can get into comic-con for free by agreeing to work for a 3 hour shift. With that promise secured, you can get your badge to get into comic-con before and after your shift. Volunteer jobs seems to range from signing people up, holding informational signs to direct traffic, line control, handing out giveaways, etc. So if you wanted to get in every day for free, you just have to work a 3 hour shift each day.  What is crazy is that I am pretty sure that CCI could probably staff the entire event with volunteers alone if they wanted, although probably not a smart move. I'm not saying everything was perfect, because it is way overcrowded, but for an event of this magnitude, I am impressed by how relatively smooth everything seemed to work.  Especially when CCI seemed to learn from mistakes and adjust the next day.

Overall, I had a blast and hope I can come back next year. I think everyone should attend SDCC at least once in their lifetime. It's good for you. SDCC for 2015 is set for July 8-12, 2015.  I'll keep my fingers crossed and maybe start thinking of a costume to wear. 😉 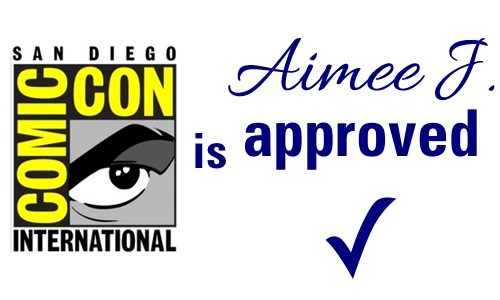