You learn something new every day. Sure you hear the saying, but it really doesn't hit you until you learn something that really stays with you – especially when you learn that fact watching a television show. Don't get me wrong, I think you can learn a lot from TV just like you can learn a lot from the Internet. I just think most things we learn come from our parents, schools, and experience.

I was watching the pilot for the now-cancelled CBS television show, Made in Jersey. In the episode, the key piece of evidence was a “mosquito tone” that was used. At first, I thought the writers were taking some creative license, but as they were explaining it, I couldn't help but wonder if it was real. Sure enough, mosquito tone is a real thing!

Mosquito tone is a tone that teens and young people are using. It's sine wave 17.4kHz that people in their mid-20's and older usually cannot hear. BUT it is a frequency that teenagers and young college students can hear.

What's the big deal? Smart people have found a way to use this.

Some have played the tone outside of their place of business to “discourage” loitering (I'd talk to a lawyer before going this route).

Some have made it into ringtones, text tones, and alarms. Teenagers are using them on their phones during school hours. If they get a message, they will know about it, and their teacher is probably too old to hear the tones. Smart, right? I mean, why limit this to school? Why not use this when you're home, maybe even when you're grounded. I'm just thinking out loud.

Anyway, I'm all about the old G.I.Joe cartoon adage: Knowing is half the battle. Now everyone knows. 🙂

Here's a YouTube video of a Mosquito ringtone. If you'd like to test your hearing, check out this post by Plasticmind. There is a “Whipper-snap-o-meter” on the page where you can test your hearing. I could barely hear 16KHz. Yikes!

You Ought to Know: Mosquito tones can only by heard (typically) by teenagers and young adults under 25ish. 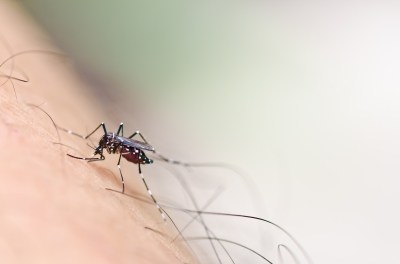