Look Up From Your Phone, Shut Down Your Display

Gary Turk has done an amazing job with his spoken word film, Look Up.  Believe it or not, there was a time when people actually socialized with one another. Where kids were entertained with playing outdoors or making forts out of bedsheets and cardboard.  When little ones were distracted with play toys and people rather than iPhones and iPads.

These are all tools, not substitutes. Teach your kids that life can be lived without a 100% dependence on technology. It is possible. Generations before us have been doing it. There was a world before Google and the iPhone.

Seriously. I'm not kidding. It's a true story. There was life before Facebook!  The thing is that kids learn from watching their parents.  If they only see you using technology to do everything then won't they do the same? Break the cycle.

I am guilty of letting technology get the better of me at times but I acknowledge that am working on it.  I think Gary's film is a wonderful reminder of these things.

Drop Gary a kudos with a thumbs up on the video via Youtube or on Twitter.  Kudos Gary!!

Remember: Look up from your phone, shut down your display. 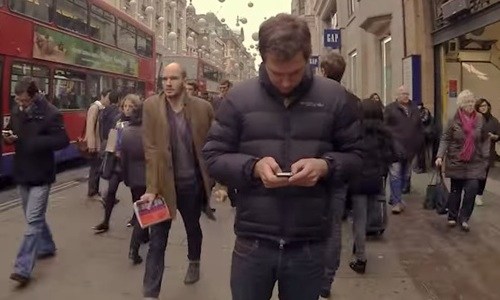