When people think of Bollywood films, a typical image seems to come to most minds. Love stories filled with comedy and drama-filled families, couples singing and dancing in exotic locations, etc. Wake up call! India has the biggest movie industry in the world. Those classic stereotypical tropes are of course still present in many Bollywood films but with a new generation, comes new ideas, new stories, and new ways of looking at life. One such example is the 2014 Hindi film Queen.

Queen tells the story of Rani (played by Kangana Ranaut), an under-confidant Delhi girl from a traditional family who decides to go on her honeymoon to Paris and Amsterdam by herself after her fiancé calls off their wedding.

I think what I appreciated about Queen the most was its modern story. Here we have a shy, traditional girl who goes against all odds and breaks the existing gender roles to go on her own solo honeymoon. Even though Rani is completely devastated over her canceled marriage and is pretty clueless about traveling to foreign places on her own, her inner strength and determination edges her to go on this adventure of a lifetime.

Rani is a character many people can relate to. She's not your average heroine, but her character still manages to rustle up the audience to root for her. She is taking control of her situation and essentially her life. Through her travels, Rani learns to let loose and embrace spontaneity and fun. She meets people from all different walks of life who show her true meanings of friendship. Also in her journey of self-discovery, Rani gains confidence and realizes her hidden potentials. The movie was never about her love life or her wedding, it is about her.

Queen's story is not one seen in many Bollywood films but I fully support the growth of similar movies. It is so important to portray stories like these, ones of self discovery that do not adhere to traditional ideas and values. Kangana Ranaut is excellent as Rani, perfectly developing her performance to match her blossoming character. I also appreciated the supporting cast, including Rani's friends who she meets in her travels. The music is an added plus to the film as well!

It is important to note that Queen is not the most family friendly Bollywood film, nevertheless I feel it is one that many can enjoy. Audiences are sure to appreciate Rani's journey, both to different countries and with herself. Inside everyone is a drive, a spark that is simply waiting to be ignited. Queen is a film that inspires one to go out there and discover your own fire. 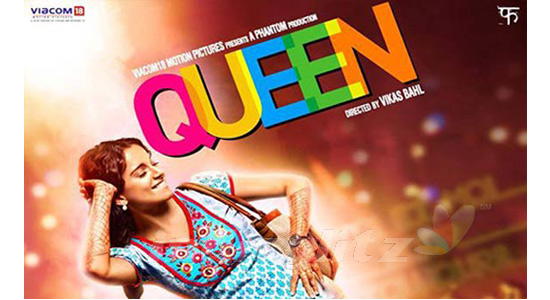