We are throwing it back to a classic for this week's Film Friday, showcasing the 1984 film The Karate Kid. No not the 2010 version with Jaden Smith and Jackie Chan, though I'm not going to lie, I liked that one too. The original Karate Kid starred Ralph Macchio and the late Pat Morita. The film is directed by John G. Alvidsen, who also directed perhaps the most classic underdog story Rocky, so it only makes sense that The Karate Kid‘s story was created in that same mold. Nevertheless, The Karate Kid presents a touching and motivational tale about fighting with your heart.

In the fictional film, The Karate Kid, a martial arts master (Pat Morita) agrees to teach martial arts to a bullied teenager (Ralph Macchio) after he moves from New Jersey to California and becomes a target of a top karate student and his gang.

The Karate Kid follows the classic underdog formula but at the same time offers great meaning to the table. Mr. Miyagi is the dream mentor and I hope everyone has someone like him in their lives. Mentors can teach us so much about life, actions, and love and Miyagi hits all three with his student Daniel. Teaching Daniel that karate comes from the heart and that martial arts is as much training the spirit as it is training the body all help him overcome his oppressors. Having a sense of personal balance and fighting with heart not only applies to martial arts but also to everyday life, which is why the film connects with audiences. Sometimes it is those small tasks (“Wax on, wax off”) that strengthen us and help prepare us for the big fights in life. The film is heartwarming as it is empowering.

Sometimes I find it hard to criticize classic films like this, but in the case of The Karate Kid, it really is a great film. The development of the unlikely friendship and respect between Mr. Miyagi and Daniel becomes one that is unforgettable, with a well paced story that is exciting as it is touching. The acting is well done too with Pat Morita's iconic performance only adding to his enduring legacy as an excellent actor. I appreciated how the film was able to balance both the high-strung martial arts sequences and fights with the light sections focusing on Daniel getting to know Mr. Miyagi and training under him. Again, the film is surprisingly well done even after further inspection.

The Karate Kid is a film that has transcended generations and still remains one loved by audiences alike. A simple underdog story, its layers reveal a film with heartwarming themes of friendship and motivation interlaced with martial arts. The image of a bullied and physically beaten Daniel learning to fight back against his enemies and become one with himself is inspiring as is his mentor ship with Mr. Miyagi. I fully recommend the film to all audiences as it is one that is enjoyable and touching.

On the Ticket Stub Love meter, I give The Karate Kid 5 out 5 ticket stubs. 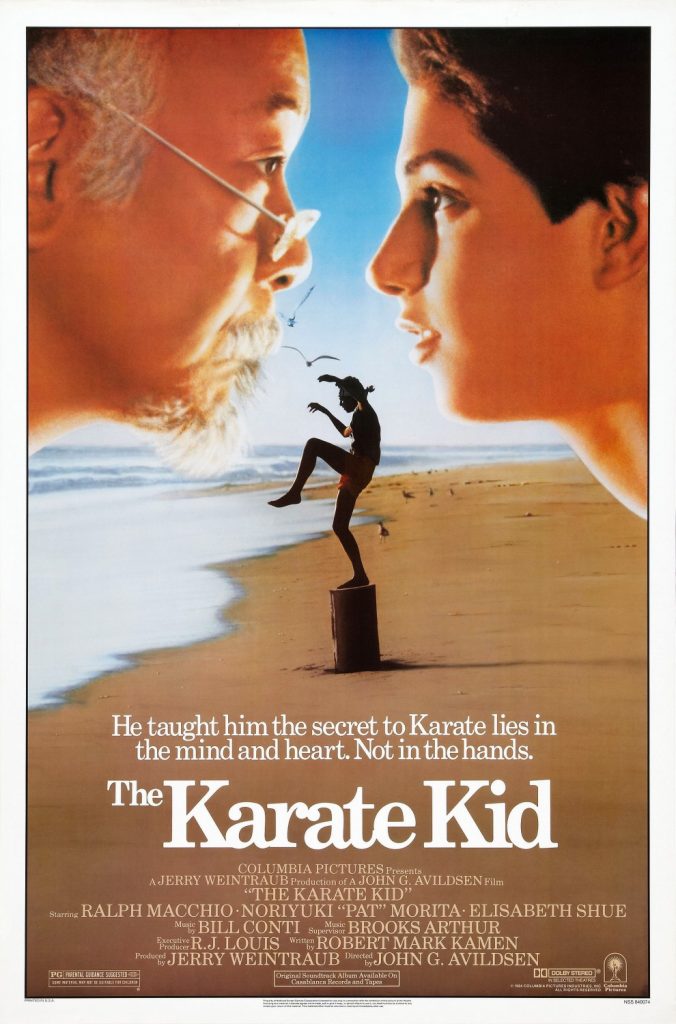