The combination of a biographical film with a sports drama is sure to elicit a moving film, as is most certainly the case with Dangal, our Film Friday selection for this week. Dangal has become the highest grossing movie in India and is still setting box office records all over the world. So why the major success? The answer is simple. Dangal is a well made film with a fantastic story and powerful performances that draw audiences into its large heart.

Directed by Nitesh Tiwari, Dangal tells the true story of former amateur wrestler Mahavir Singh Phogat (played by Aamir Khan) who trains his daughters Geeta Phogat and Babita Kumari to wrestle and win the gold for their country.

The true story of Mahavir Singh Phogat and his daughters Geeta and Babita is truly one to marvel. In a time and place where girls were looked down upon for wearing shorts let alone wrestle, their achievements are no easy feat. Even today female wrestling has a stigma that is hard to shake. It was unheard of for girls to wrestle but that was no concern for Mahavir. He saw the talent in his daughters and regularly challenged societal restrictions by pushing his girls to train in the very best ways. Whether it be waking them up at 5 am to run through their village in homemade exercise clothes to cutting their hair short, Mahavir paid no mind to the judgement of others and only thought of his daughters.

Though it might have seemed extreme at the time, his extensive training helped his daughters gain success. Geeta and Babita dealt with extreme opposition from their first small matches with boys but soon silenced their naysayers with their extreme skill and hard work. They worked for their success and never gave up even in the face of oppression due to their gender. What I found really moving was that Mahavir was not just doing this so that his daughters could live out his dream of winning international gold for India. He did it all so that his daughters could have a better future beyond one of being married off at young age for a domestic life.

The performances in this film were fantastic. Aamir Khan is such a solid actor with many great films under his belt, but once again he showcases his amazing talent in a role seemingly made for him. His passion is so strong as a man faced with the task of acting as a both a coach and a father to his children. It is truly a joy to watch the development of Geeta and Babita on-screen. Zaira Wasim and Suhani Bhatnagar play the younger Geeta and Babita respectively and share their young talent budding on-screen. Training sequences of them with their father are so well done and entertaining. Fatima Sana Shaikh and Sanya Malhotra are introduced as the older Geeta and Babita, with Shaikh stealing the show with a fantastic performance that has me truly excited for what she might do next.

The wrestling sequences in Dangal are of top quality and even the most uninterested viewer will soon find themselves cheering and holding their breath during the matches. It is such a pleasure to be able to watch incredible performances take hold of such a dominating sport to ultimately produce a triumphant film that celebrates the human spirit. Underneath the wrestling, Dangal is a film about a father's love for his daughters. It is a film about two girls who defy all the odds and prove others wrong with their strength. I strongly recommend Dangal for all audiences. It is truly an enjoyable film that will ignite national pride. Young girls everywhere can be inspired by Geeta and Babita's amazing journey. Dangal wins the gold, both for India and in the hearts of audiences.

On the Ticket Stub Love meter, I give Dangal 5 out of 5 ticket stubs. 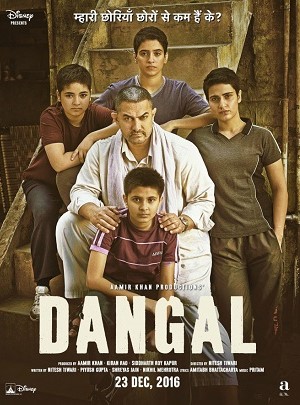