We are currently in the midst of an era of film remakes, adaptations, reboots, etc. It seems like everything from books, to old movies, to classic fairy tales are all being adapted for the big screen. Disney in particular has been rolling out the live action adaptations of their classic films with the most recent Beauty and the Beast (my personal favorite), to the Jungle Book, Maleficent, and soon Mulan and Aladdin among many others. One of the first live action adaptations Disney recently produced was 2015's Cinderella, directed by Kenneth Branagh and starring Lily James, Richard Madden, Cate Blanchett, and Helena Bonham Carter. Though a simple fairy tale, a lot can be surprisingly learned from the girl who loses her shoe.

Based on the folk tale and the fictional 1950 animated film, Cinderella tells the story of a young Ella (Lily James), who after her father passes away, finds herself at the hands of her cruel stepmother and stepsisters. Ella's pure heart however gives her strength and her fortunes begin to change after a chance encounter with a dashing stranger.

Many people already know the story of Cinderella and I know what they might be thinking, what is so inspiring or motivating about it? Cinderella is a fairy tale. There is not much to be taken too seriously about it, (I mean a pumpkin gets turned into a carriage in it). However fairy tales often have a main message and I found the one in the live action adaptation to be particularly memorable.

Ella's mother tells Ella to always “have courage and be kind”, a saying that Ella takes to heart and follows steadfastly years later. Have courage and be kind. It is such a simple statement that holds true meaning. Ella did not live an easy life thanks to her scheming stepmother and stepsisters. However by being brave and kind, she persevered and rose above them. I think we can all take a note from Ella, and try to have courage and be kind in our own lives. No matter what the circumstances, having courage and being kind might just be part of the solution to overcome that obstacle and achieve the next goal in life.

The live action adaption of Cinderella is incredibly well done. Visually it is gorgeous, with rich colors and fantastical sets and costumes. The cast performances are great as well. Downton Abbey star Lily James surprised me with her performance in the titular role, bringing a freshness to the role that perfectly suited Ella. Perhaps the most praise should be given to Cate Blanchett though, with her performance as the evil stepmother Lady Tremaine. Blanchett was perfect in the role and brought about a deliciously sinister performance all while maintaining the charm of the film.

Cinderella is not exactly known as the most empowering princess. While more might have been done to develop the character, the film still did a good job of adding a little bit more depth to Cinderella. Branagh has created a lush fairy tale for audiences, one that fully engages with plenty of heart. I recommend the film and I believe people of all ages can enjoy this refreshing adaptation of a classic tale.

On the Ticket Stub Love meter, I give Cinderella 4.5 out 5 ticket stubs. 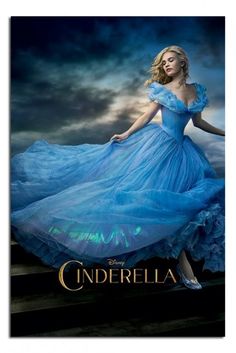