Matt Miller has been an Air Force pilot, an advertising executive, and now—the owner of a vending company franchise which has raised over $4 million for schools. His unmistakable passion to help students and educators rings loud and clear, even reaching to his newest projects. His company, School Spirit Vending, provides a proven and profitable system for professionals looking to develop secondary income streams. Join me to hear Matt’s incredible story!

Are you STUCK? Do you feel obligated to keep an unfulfilling job because it uses your college degree? Matt shares great advice about not being stuck in that expertise for the rest of your life. He says that sometimes we take ourselves way too seriously and overlook opportunities that are right in front of us. Following Matt’s personal story of reinvention will motivate you to consider a big change that may lead to an even bigger future!

Passive Income is the KEY!

Do you want to learn to make money even while you sleep? This was the premise behind Matt’s “AHA moment” after reading a book about passive income. While enduring struggle after struggle in his advertising career, Matt had to deliver pizzas, sell aluminum cans, and sell used books online, just to make ends meet for his family. Matt started small with gumball vending machines while keeping his corporate career. He watched in amazement at the ease of the process that kept his profits increasing exponentially.

A Paradigm Shift in Fundraising

Do you dream of long weekends and extended vacations with family? These things are a reality for Matt now, but it didn’t start out that way. Using his advertising background, Matt started out with stickers in vending machines at one school—watching his sales skyrocket. His business has sold 30 million stickers in the last 9 years! He shares how he built a brand, expanded, and developed a franchising system to help others chase their dreams as well. His business helps students and educators in this revolutionary avenue in the fundraising process, and his newest projects include comic book series and novels—all designed to get kids to read.

TWEET:[spp-tweet tweet=” “Don’t get in the #habit of trading #hours for #dollars!” @ssvbusiness”]

GUEST RECOMMENDATION:“Quit getting ready to do something, and GO DO IT! Take those first steps to get in the game and make it happen.”

TWEET: [spp-tweet tweet=”“I went overnight from a hero to a zero in the #advertising world.” @ssvbusiness”]

TWEET: [spp-tweet tweet=”“I decided I would get out of #debt and never have to #work for someone else again.” @ssvbusiness”] 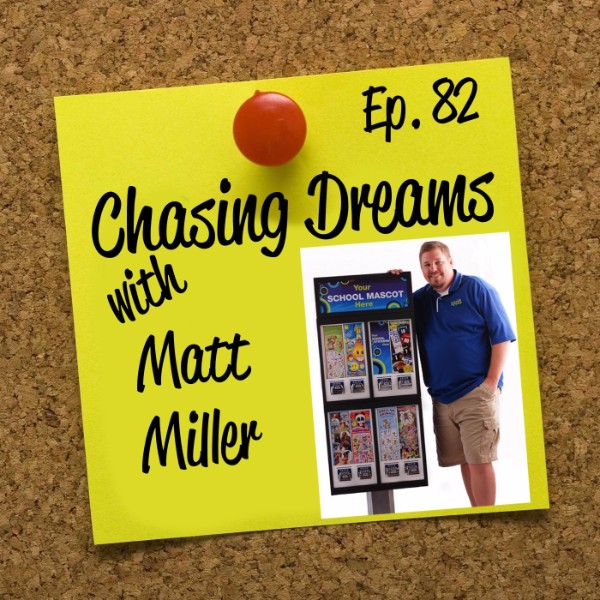