Ep. 30: Miguel Palmeiro – Helping Others Through Your Dreams

For Miguel Palmeiro, giving back is at the core of who he is and what his law firm stands for. He found his passion for the law while attending school as a pre-med student. Disillusioned with the field of medicine and wanted to find a way to truly give back, he decided to follow in his older brother’s footsteps and take a look at law school. After doing incredibly well on the LSATs, Miguel felt he had found his calling. He shares with Aimee J. how he chased his dreams, became a success, and still maintains focus on giving back to the people who made it all possible.

TWEET: [spp-tweet tweet=”The importance of giving back and pushing forward, on this episode of #ChasingDreams”]

Finding your purpose, even when it takes you away from your planned path.

Miguel shares the importance of always striving to find happiness. His plan when he started school was to be a doctor. But, when he realized it wasn’t making him happy, Miguel knew something had to change. His passion for finding his purpose drove him to keep pushing forward to make his dreams a reality. Miguel shares how important it was to have support as he applied for law school and the encouragement he felt as it came to fruition. While attending law school, Miguel found his true calling of litigation while on the National Mock Trial Team. Once he found his passion, Miguel set his sights on being a litigator who always maintained focus on giving back.

How Miguel manages to give back through his law firm.

Straight out of law school, Miguel worked with his brother. Eventually, he knew he would have to find a way to be a litigator so he could follow his true purpose. This led to the creation of The Law Offices of Miguel Palmeiro. Miguel discusses with Aimee why he places such a high value on giving back and some of the ways they manage to maintain this as part of the practice. He discusses their focus on helping indigent clients because of his passion for helping clients who wouldn’t otherwise be able to afford help. Miguel’s focus on community extends to work he does with the state of Maryland and generously giving back to his own law school.

TWEET: [spp-tweet tweet=”Finding your purpose even when it wasn’t your original plan, on this episode of #ChasingDreams”]

Challenging the status quo and not compromising your values.

From the start, Miguel knew he would challenge the status quo in all that he did. His very first case was his own, after having an accident and facing difficulties with the insurance company. Miguel’s passion for finding ways to do more has carried on throughout his career. He believes that giving back is a core part of his success because, according to Miguel, as long as you keep giving back and pushing forward, everything will work out. Miguel goes on to explain how important it is to take a gamble on yourself in order to chase your dreams.

Finding your happiness and knowing your end goal.

For Miguel, building a successful law practice is incredibly rewarding because of how much it allows him to give back. He explains his future plans for The Law Offices of Miguel Palmeiro and his priorities moving forward. Miguel also offers his #1 piece of advice for fellow dream chasers: find the top person in the field you want to be in and connect with them. He shares the value of getting advice from someone who’s been where you’re starting and the insight they can provide. In addition to being happy with his life and career, Miguel has received accolades for his work, including being listed in the Top 10 Under 40 Personal Injury Attorneys for 2015.

Find the top person in the area you want to pursue and reach out to them, connect with them, see what ideas you can get from them.

The Law Offices of Miguel Palmeiro

TWEET: [spp-tweet tweet=”Pushing forward when you find your true path, on this episode of #ChasingDreams”]

TWEET: [spp-tweet tweet=”Why you need to put your ego aside and learn from others, on this episode of #ChasingDreams”] 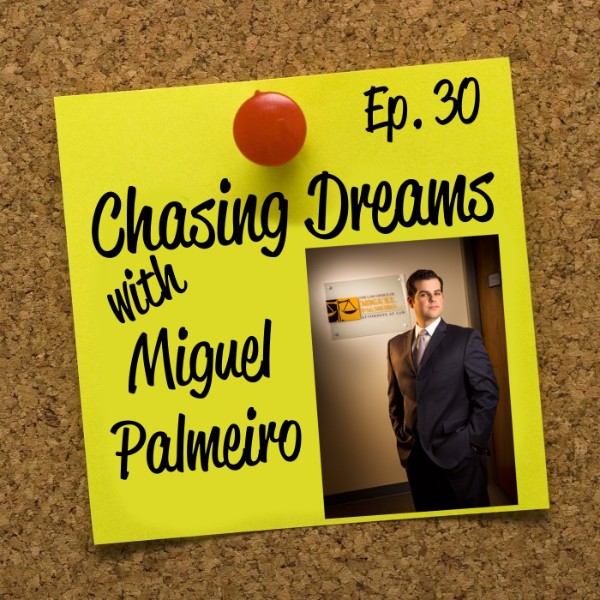