Ep. 29: Sarika Mehta – Cooking Up Your Dreams in the Kitchen

Today’s episode of Chasing Dreams features the youngest dream chaser ever on the show. Aimee J. chats with Sarika Mehta, an 18-year-old student at the Culinary Institute of America who is going after her dreams with everything she’s got. Sarika first fell in love with cooking in middle school. Over the years it evolved into her true passion and purpose. Sarika is passionately pursuing her dreams and shares with Aimee J. the process of figuring out her path and finding a way to go after it.

TWEET: [spp-tweet tweet=”Chasing your dreams can start at any age, on this episode of #ChasingDreams”]

Finding your purpose at a young age.

When Sarika first started experimenting in the kitchen, she was in middle school. She shares the process of discovering cooking and how it evolved into her true path in life. Sarika first fell in love with the feeling of preparing food for friends and family and seeing how happy it makes them. She discusses how rewarding it is to see people appreciate what she’s created. Sarika goes on to talk about how food brings together community and is all about spending time with people you care about. Her passion for food is clear, so it’s no wonder she found her calling in the culinary arts.

As Sarika’s love of cooking evolved, it became clear that this would be her path. Her parents always knew she wouldn’t follow a traditional path, like math or science, so they weren’t surprised to hear Sarika wanted to go to culinary school. They’re only requirement? That she get a 4-year degree in whatever she decided to pursue. And so, she decided to attend the prestigious Culinary Institute of America. Sarika talks about a typical day at school and how it differs from what she expected going into it. It’s surprising to learn just how academic the program is, which is something Sarika finds particularly rewarding.

TWEET: [spp-tweet tweet=”What happens when you decide not to follow a traditional path, on this episode of #ChasingDreams”]

Identifying your big goals as you work towards your dreams.

At a very young age, Sarika is very clear about her goals and purpose. She’s also open to the fact that her plans will evolve as she tries new things in her field. As she works towards her Associate’s Degree, Sarika believes she will pursue a career in catering, but also has her eye on opening a restaurant of her own. After her Associate’s Degree, she will pursue her Bachelor’s Degree, at which time she can choose her area of specialty. The CIA has endless options in her field, which is something that excites Sarika.

Sarika’s favorite dish and how she maintains focus on her goals.

As Aimee J. closes out her chat with Sarika, it’s pretty clear that she’s following her true path. Sarika has tremendous passion for the culinary arts and is excited about what the future holds. She shares her current favorite recipe and her take on culinary-themed movies like “Chef” and “Burnt”. In closing, Sarika shares a quote that has inspired her on her journey and one that is sure to inspire her fellow Dream Chasers. It’s refreshing to hear from someone who, at such a young age, is so clear on her purpose and passion.

“Do not go where the path may lead. Go instead where there is no path and leave a trail.” ~ Ralph Waldo Emerson

TWEET: [spp-tweet tweet=”Identifying your big goals as you pursue your dreams, on this episode of #ChasingDreams”]

TWEET: [spp-tweet tweet=”Do not go where the path may lead, instead go where there is no path and leave a trail. ~ Ralph Waldo Emerson”] 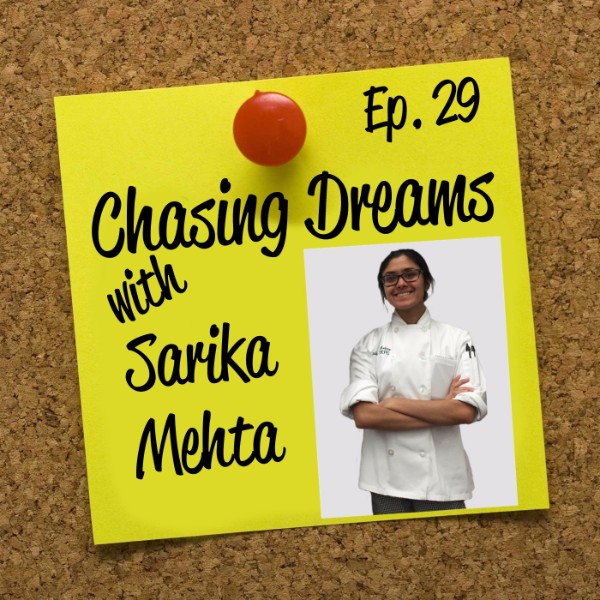