Ep. 204: Paul Ollinger – Paul Ollinger: From Facebook to Stand Up Comedian and Host of the Crazy Money Podcast

Is your work your passion? Sadly, for many people, work is just something they do to earn a paycheck. Today’s show is all about how much more fulfilling your work can be when you commit to being “all in” on chasing your dreams.

Paul Ollinger is a nationally-touring stand-up comedian. After achieving success in the corporate world as one of the first 250 employees of Facebook, Paul finally decided it was time to give in to his true passion—stand-up comedy. Since leaving his job at Facebook, he made the world of stand-up comedy his full-time job and now provides his audiences with a hilarious, but honest, no-nonsense approach to everyday life. Crowds of all ages embrace Paul as a straight shooter who talks about how it is, rather than how we wish it would be. Today, Paul’s comedy career takes him to clubs and corporate events all over North America, where he has opened for top comics and been featured at major comedy clubs and festivals. Paul is also the host of Crazy Money, a podcast in which he interviews entrepreneurs, celebrities, authors, and artists with a humorous perspective on money, wealth, and careers. The show focuses on how we think about and live with money, both as a society and as individuals.

Have you ever floundered between careers? Paul flip-flopped between his corporate and comedy careers for about 15 years, simply because he was fearful to launch into comedy as a full-time endeavor. When he first joined Facebook, he left his comedy dreams behind completely, but always felt much tension and conflict in that decision. He says that his creative inner self ate away at him until he knew he had to leave Facebook and do something else. At the time, he was too scared to admit to himself that what he wanted was to focus full-time on comedy.

TWEET: What would happen if I gave it my all? @paul_ollinger #chasingdreams

Is your career what you should be doing? Paul loves his career in comedy today and is glad he dared to leave the corporate world behind, but he admits that some days are just a grind. He explains why it’s important to take a big-picture, high-level view of your career. Some days come when he feels like he isn’t getting the traction he needs in the comedy business, but there are other days when he knows he’s on the right track to accomplish his goals.

TWEET: It’s the relationship between what you want and what you have that defines your wealth. @paul_ollinger #chasingdreams

Work: much more than a paycheck

Is your work just something you do to earn a paycheck? Paul says that work is about so much more than a paycheck! It’s about relationships, camaraderie, and identity. When he didn’t have work in his life, he felt lonely, depressed, and adrift. Work helps you meet new challenges, learn new things, and have a sense of belonging; Paul didn’t realize he was missing out on these things until he went through a time when work wasn’t part of his life. All of these attitudes played into the decision to start his podcast to explore how our relationship with money affects our decision-making and our overall happiness.

TWEET: If you have a Plan B, then you’ll be tempted to use it. @paul_ollinger #chasingdreams

Guest Recommendation: ONE action for a dream chaser to take–”Think in decades.”

TWEET: I’ve been flip-flopping my comedy and corporate careers for about 15 years. @paul_ollinger #chasingdreams

TWEET: When my wife asked about this new company called Facebook, I told her that someday it would be as big as Myspace. @paul_ollinger #chasingdreams 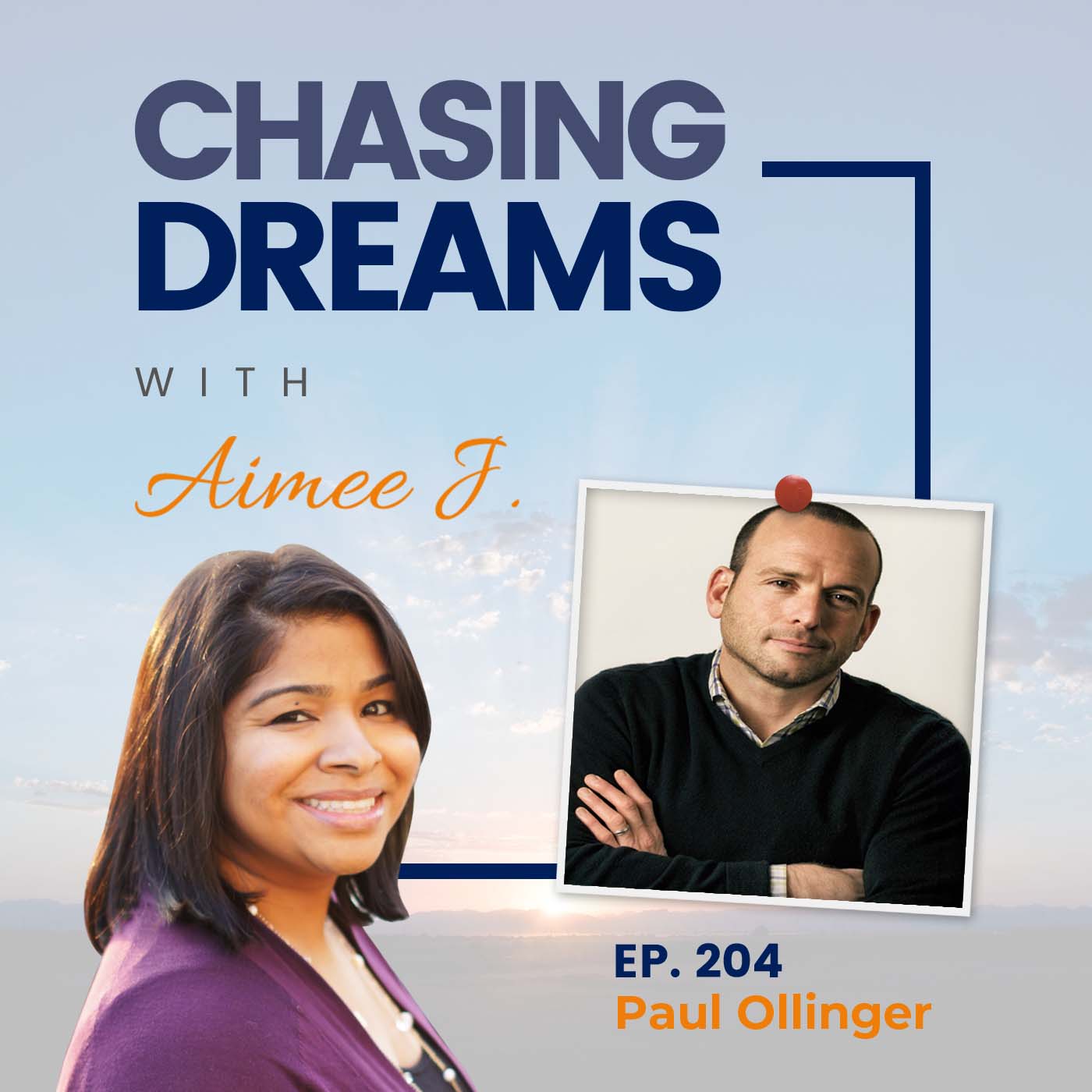