Ep. 19: Dozie Onunkwo – Figuring Out Your Dream as you Go Along

Dozie Onunkwo, Ph.D. is an entrepreneur and scientist from Riverdale, MD, who obtained a Ph.D. in Biomedical Engineering from Purdue University in Dec. 2010.  While working 3 years as a biomedical engineer, he pursued his passion for entrepreneurship and fitness by founding BN Shape, a worldwide fitness lifestyle brand that promotes the pursuit and maintenance of a healthy, fit community while encouraging the individuals who thrive within it.  He now runs BN Shape full-time and recently joined neurotechnology startup, Neuro Vigor, as a scientific and business expert. This conversation is about Dozie’s journey from Ph.D. student to entrepreneur and the successes he’s experienced because of his hard work.

TWEET: [spp-tweet tweet=”Build your business by learning as you move forward, on this episode of Chasing Dreams”]

Success comes from being willing to do things that others aren’t will to do.

That’s what Dozie Onunkwo says of the way he started his clothing and fitness business. When he got the idea and knew that he wanted to pursue it, he started exploring how to do the things he had in mind. It took a long time and lots of research. He had many sleepless nights because he was busy working, building his business. Clearly, he was chasing a dream that he was convinced he should be chasing and he was willing to do the things it took to get there. How committed are you to your dreams? What are you willing to do in order to see them happen? Get a shot of inspiration on this episode of Chasing Dreams with Aimee J.

Taking his personal skills and applying them to his dream.

Being Ph.D. student, Dozie Onunkwo knew how to do research. He knew what it took to get to the bottom of a question or problem. He took those researching skills and combined them with perseverance to begin researching his business. He learned how to pick good products based on market research. He learned how to design his clothing line the way he wanted it to be. He put together every piece of his business by leveraging his existing skill set into the new environment of entrepreneurism. You’ll enjoy hearing how Dozie did it, on this episode.

Why you must learn how to deal with failure.

Every dream is going to have its setbacks. Every time you chase your dream you’re going to take steps that seem right at the time, but turn out to wrong. Those disappointments and failures are going to be a reality of your dream chasing journey, so you’ve got to know to deal with them. Today’s guest, Dozie Onunko says that one of the main skills that entrepreneurs need to develop is the ability to accept failure, learn from it, and put those lessons to work for you. You can hear Dozie’s advice about facing failure, on this episode.

The importance of getting rid of negativity in your life.

When Aimee asked Dozie Onunko, her guest today, what he would recommend to people who are out there chasing their dreams, he gave this powerful advice: Remove all negativity from your life. It sounds like common sense. We all know that negativity can drag you down. But he took it farther to say that you might have to get yourself away from negative people – friends, family members, other people you love – simply because they are not yet capable of supporting you in the pursuit of your dream in the way you need. It’s a powerful piece of advice that is only a taste of what Dozie has to share from his story, so make sure you listen to this episode.

TWEET: [spp-tweet tweet=”Ruthlessly remove all negativity from your life ~ Dr. Dozie Onunkwo, on this episode”]

Remove all negativity from your life so you can believe in yourself.

Have a support system that encourages and keeps you motivated.

Aimee and her guest alternate saying things that fit in the chosen category. They must continue doing so, in rapid fashion, without repeating one, hesitating too long, or giving a wrong answer, until one of them can’t come up with another name. Who’s the winner?

TWEET: [spp-tweet tweet=”An essential skill for dream chasers: Learning how to live with failure, on this episode”] 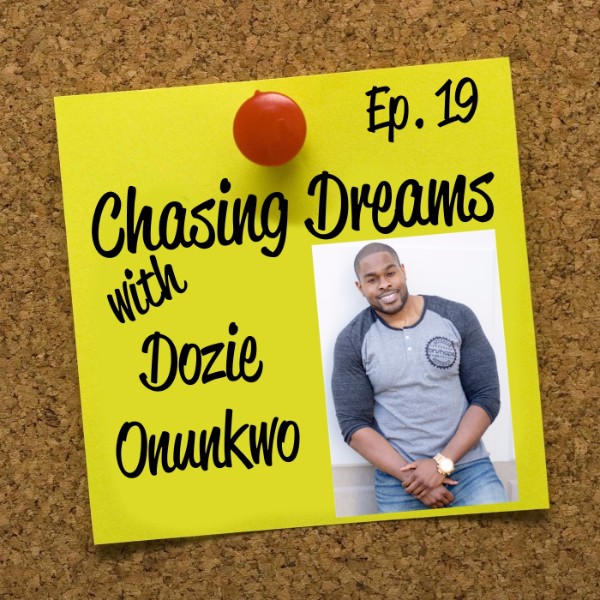