Ep. 11: Bindu Mathai – Creating Your Path With A Makeup Brush

What happens when your dreams begin to come into conflict with family and cultural norms? How should you think about them? How should you go about achieving them? In this episode of Chasing Dreams, with Aimee J., we’ll hear from Bindu Mathai, a makeup artist and business owner who has gone through those exact issues and come out on the other side with joy, success, and peace in her heart about the way she got to where she is. This is a delightful and inspiring conversation for any Dream Chaser, with lots of nuggets for you to take from it. Be sure to take some time to listen.

A degree in psychology, a part time job, and an unexpected career path.

Bindu Mathai had finished up her Bachelor’s degree in psychology and began searching for the right school to complete her Master’s level work when she took on a job at a large chain department store. It was there that she became skilled at assessing the appropriate makeup colors for the customers who came into the store. Years later she became a manager at Sephora.  Her latent love for makeup and color surfaced and she found herself drawn in a direction she certainly didn’t expect. To make a change she’d have to make a 180 degree turn. Was it worth it? In this episode you can hear the details of Bindu’s story, the decision she made at that critical juncture, and how she’s grown her business to what it is today.

When people don’t understand your dream, what do you do?

Becoming a professional makeup artist was not something familiar to Bindu Mathai’s family or culture, so when she decided to change from a future in psychology to becoming a makeup artist there was much confusion. Some people simply didn’t understand what it was she wanted to do. Others were in outright opposition to her decision. Still others didn’t quite get it but were supportive of her in the pursuit of what she felt she should do. How did Bindu get through that painful, difficult season? You’ll have to hear it in her own words by listening to this episode.

TWEET: [spp-tweet tweet=”If you’re going to do it, be the best at it, on this episode of #ChasingDreams”]

“Everyone on the internet was my mentor.”

When Bindu Mathai first began her pursuit of establishing her business as a makeup artist, she knew very little about how to set up an online presence, social media, or business practices. She didn’t have a true mentor who she could go to for advice, so she began researching and learning on her own. There were many people on the internet who provided business and entrepreneurial advice freely and she soaked up as much as she could. She feels that there is no excuse for not getting started because the low cost or free resources that exist in our day are plentiful. You can hear the entire story of how Bindu established her online presence and how it’s fueling her business now in this episode of Chasing Dreams.

In the end, there’s no substitute for work.

You can learn all you want about social media, website development, and brand promotion and marketing, but if you’re not doing the work to show that you are indeed an expert or master in your chosen field, all those tactics will get you nothing. It takes work to hone your craft and become a true expert. Bindu Mathai’s story on this episode of Chasing Dreams is a great example of how that hard work pays off. If you’re struggling to know what to do to establish your presence as an expert in your field, listen to Bindu’s advice. She’s got lots of wisdom to share on this episode.

TWEET: [spp-tweet tweet=”There is no substitute for work. None. ~ Bindu Mathai on this episode of #ChasingDreams”]

Rapid fire is where Aimee J. and her guest exchange rapid fire answers to a category and the first to unduly hesitate, give a wrong answer, or stop is the loser!

http://www.ChasingDreamsHQ.com/rateandreview – to leave your review of this podcast

TWEET: [spp-tweet tweet=”Everyone who was online was my mentor. I learned what I could, where I could”]

TWEET:[spp-tweet tweet=” If you overanalyze without #TakingAction, you’re going to stall out in life”]

TWEET: [spp-tweet tweet=”Nobody will make a change in your life except you.”] 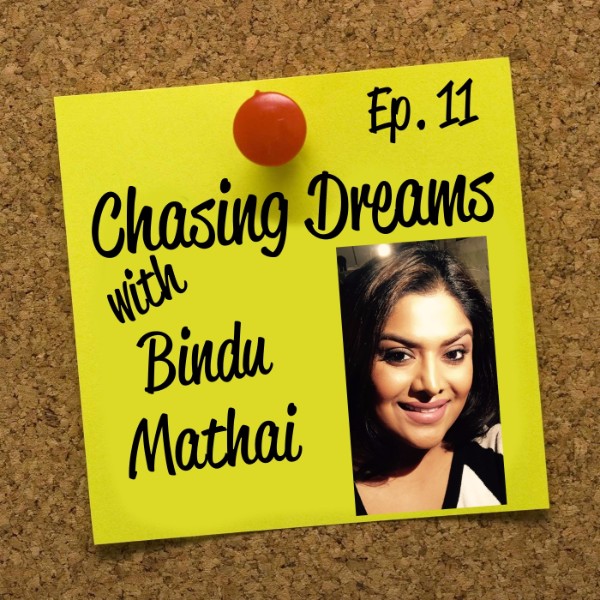