Ep. 103: Leneen Faith – Bringing the Adventures of Peacebe and the Heartwatch to Life

Leneen Faith is a wife, mom of three, elementary school teacher, author, and CEO. Despite her full plate, she continues chasing her dream of inspiring children to be kids of character! The dream nearest and dearest to her heart is her children’s brand, The Adventures of Peacebe and the Heartwatch. Peacebe is currently an 8-book character education series that’s already in 20 schools. However, Leneen’s dream is for her brand to become a cartoon on a major cartoon network. Leneen is a firm believer that you can never be too busy to chase your dream and fulfill your purpose.

TWEET:[spp-tweet tweet=” “Learn ways to inspire #children to have good #character with #LeneenFaith””]

How is a dream born? Dreams come in different ways to different people, but Leneen says her dream came as an idea that “popped into” her head way back in 2005. She wrote out her first Peacebe story, but then shelved the idea for FIVE years. She knew her inspiration was to teach kids about character through her writing, so she persevered until her idea became an 8-book series that teaches that “it’s cool to be a kid with character and values.”

Taking the Next Step

Once you have grabbed hold of your dream, what do you DO with it? Leneen knew it would take action on her part to see the growth of her dream. She took a year off from teaching to knock on doors and talk to school principals about getting her series into schools. Her persistence paid off, as the series is now used in 20 schools! The dream doesn’t stop there, as Leneen admits she sometimes let fear get in the way of growth. The most important step is to STICK WITH IT! She now plans another year of hiatus from teaching to market the series to more schools and more avenues. She is going after it ALL!

TWEET: [spp-tweet tweet=”“This time around, I’m going to do it a little bit better.” #LeneenFaith”]

Chasing the Dream WITH your Family

Who can you rely on for support in chasing your dream? Leneen turns to her family, especially her brother David, who partners with her in illustrating her books. Being raised by a single mom, Leneen and her five siblings were taught the value of a good attitude, hard work, and waiting. Leneen says there is no one else she would want to “do this” with besides her family.

Guest Recommendation: ONE action for a dream chaser to take—“You have to realize that your dream is bigger than you. It will take pressure off you and give you a bigger purpose. Putting pressure on yourself keeps you from being creative.”

TWEET: [spp-tweet tweet=”“I want to give it my ALL this year and trust and see what happens.” Leneen Faith”]

TWEET:[spp-tweet tweet=” “I feel blessed to be on this #journey with my #family and wouldn’t want to share it with anyone else. #LeneenFaith”] 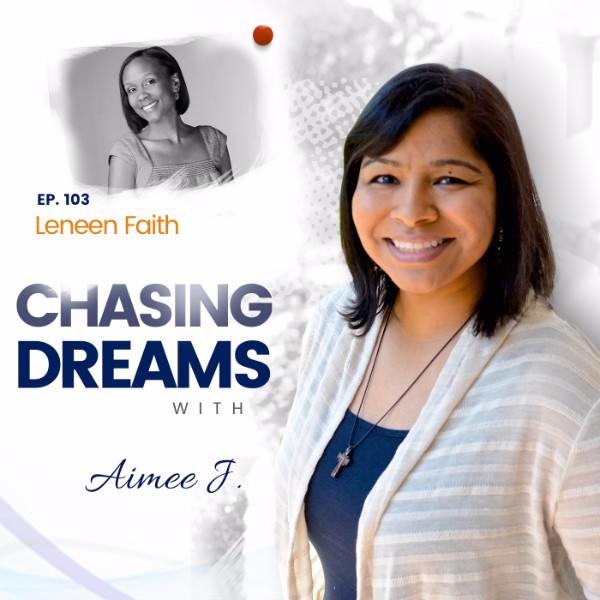