Ep. 35: Mat Poovan – Discovering Your Dreams When You Least Expect To

For Mat Poovan, the path to his dreams was filled with unexpected twists and turns. He always had lofty ambitions and a clear path to follow to achieve his goals. But, on the road to some of those goals, Mat found his true passion: Indian classical music. Specifically, it was the sitar that grabbed his attention. Mat discovered the sitar quite by accident, while attending class and studying ancient India. His teacher played Indian classical music in the background and the rest, as they say, is history. From there, Mat pursued his passion for music, but it was balanced with some other passions – creating a full life of being a business consultant by day and a talented musician by night.

TWEET: Discovering your #dreams when you least expect to, on this episode of #ChasingDreams

Following his path – even though it was unexpected.

When Mat started school, he had already been studying the sitar for several years. He knew he had to be more practical about school, so he decided to major in political science with a minor in economics. Mat’s end goal was to become an ambassador eventually. As his passion for music grew, Mat’s goals in political science shifted. He made some changes so that he could pursue both passions – changing his major and eventually discovered instructional design. His passion for instructional design would pave the way for a solid career as a business consultant, while allowing Mat the freedom to pursue music in his downtime.

Finding your true passion and pursuing it with all that you’ve got.

Mat discusses his passion for instructional design and walks us down the path of discovering the sitar at a young age, and how he ended up with his first instrument. Once Mat set his sights on learning the sitar, everything fell into place around it. He found a local teacher who was an expert in Indian classical music and he was able to develop his skills over the years. His love of the sitar and Indian classical music as a whole was clear – and Mat eventually found himself being encouraged to become a teacher. This led to many new opportunities in the music industry, including his work with the Indian Academy of Music & Fine Arts and his work with the record label Aimrec.

TWEET: When it comes to #pursuing your #passion, you have to go after it with all that you’ve got

Being a trendsetter in the realm of Indian Classical Music.

Mat gives us insight into his connection to Indian classical music and how he knew – instantly – that this was a path he needed to follow. He also discusses how uncommon it is to find an American-born Indian who plays the sitar. In reality, Mat had become a trendsetter and was blazing a trail for budding musicians who wanted to follow his path. He discusses his goals within music, as well as his other career in industrial design, and shares insight into some “bucket list” items he’d like to conquer. One of his bucket list items? To record an album and eventually win a Grammy. Mat believes in dreaming big, and that’s just what he does.

The key to following your dreams? Just start.

As Aimee and Mat close out their chat, they discuss the value of setting huge goals in order to propel yourself forward. Mat offers advice to fellow dream chasers who are ready to pursue their dreams. The key to his advice? Just start. Mat’s all about planning and making sure you know the steps that will help you achieve your goal. But, according to Mat, the most important thing is to just start. Mat also discusses some other dreams, including playing a huge venues like The Kennedy Center and someday building a house. When it comes to chasing dreams, Mat is a shining example of following the road less traveled and being true to yourself along the way.

TWEET: Once you find your #dream, the key to making it happen is to just start ~ Mat Poovan

If there’s something you want to do, make a plan and just start.

TWEET: Being a trendsetter in the world of #Indian #Classical #Music, on this episode of #ChasingDreams

TWEET: Why it’s okay to pursue more than one #dream, and still find #balance in your life, on this episode of #ChasingDreams 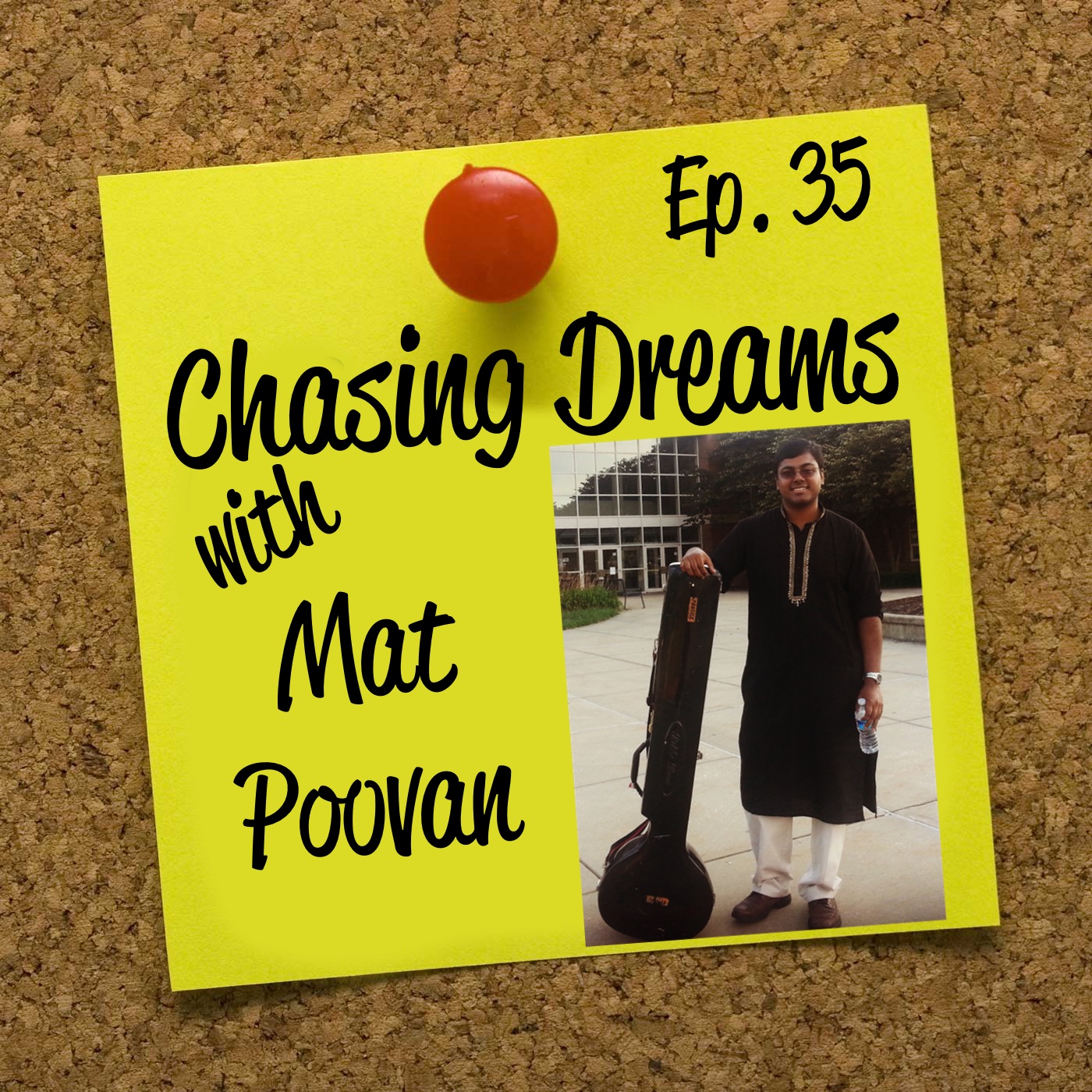