To kick off Black History Month, we are visiting with a New York Times bestselling author. You may remember her from Episode 58, way back in 2016. She was here to promote her first book, and today, she’s telling us about her second book. The book is available for preorder, and it’s required reading for any dream chaser. Join us!

Luvvie Ajayi Jones is a New York Times bestselling author, speaker, and podcast host who thrives at the intersection of comedy, media, and justice. Her debut book, I’M JUDGING YOU: The Do-Better Manual, was released to critical acclaim, hitting the New York Times bestselling list at #5. She’s an internationally recognized speaker who takes on dozens of stages every year around the globe, and she has spoken at some of the world's most innovative companies and conferences, including Google, Facebook, Amazon, and Twitter. Her TEDtalk, “Get Comfortable with Being Uncomfortable,” has over 5.5 million views! Her new book, Professional Troublemaker: The Fear-Fighter Manual, drops March 2, 2021, and is available for preorder at www.professionaltroublemakerbook.com.

Who is a hero that you’re tempted to put up on a pedestal? Luvvie doesn’t want to be put on a pedestal. Even though we tend to view people with platforms as heroes, we have to realize that they went through the grind and the struggles to take their journey. People on pedestals are set up for failure because they WILL get tired and fall. Even our heroes are flawed individuals who are learning and growing along the way. Luvvie wants everyone to know that she’s a regular person, just like everyone else. It takes constant work to maintain a platform of influence and be an ordinary person doing extraordinary things.

TWEET: Even our heroes are flawed individuals who are learning and growing along the way. @luvvie #chasingdreams

Would you ever vacation alone? You’ll probably say NO, but Luvvie urges you to reconsider that viewpoint. As her 30th birthday approached, she wanted to go on vacation but realized it was too late for any of her friends to schedule a trip. She went alone to the Dominican Republic and had the time of her life. That same year, she visited several other countries all over the world–all by herself. She fully thrived in the freedom to make her own plans and choices each day without consulting anyone else. There are so few opportunities in life to do exactly what we want without having to consider and accommodate the wants and needs of other people. She says these solo vacations are a true gift she gave to herself that have changed her life. She’s learned that she doesn’t need the counsel and approval of other people to do what we need to in life. Why do we live our lives based on the opinions of others? Try a solo vacation if you need a new perspective on life!

TWEET: Don’t live your life based on the opinions of others. @luvvie #chasingdreams

“Too much, too loud, and too troublesome”

Are you a fear fighter? Luvvie wrote her second book to help those who need to know how to fight fear in their lives, which is an especially relevant topic for women. With blogging, writing, podcasting, and creating communities, Luvvie tries to establish what she needs because that means that others will find value there also. The concept of fear-fighting means we have to do scary things sometimes. Fear is a universal emotion, but we each feel like we are alone in our uncertainty, doubt, and anxiety. We need community to know that we are not alone. We need others to be “too much, too loud, and too troublesome” with us. Remember that it’s OK to stay scared and move forward with courage.

Guest Recommendation: ONE action for a dream chaser to take–”Write down your dreams. Whatever they are, write them down.”

Why do we live our lives according to the opinions of others? @luvvie #chasingdreams

Courage is not being fearless. Courage is being afraid but doing it anyway. @luvvie #chasingdreams

Most people that have a platform of influence are just ordinary people doing extraordinary things. @luvvie #chasingdreams

My goal is to build a generation of troublemakers. @luvvie #chasingdreams 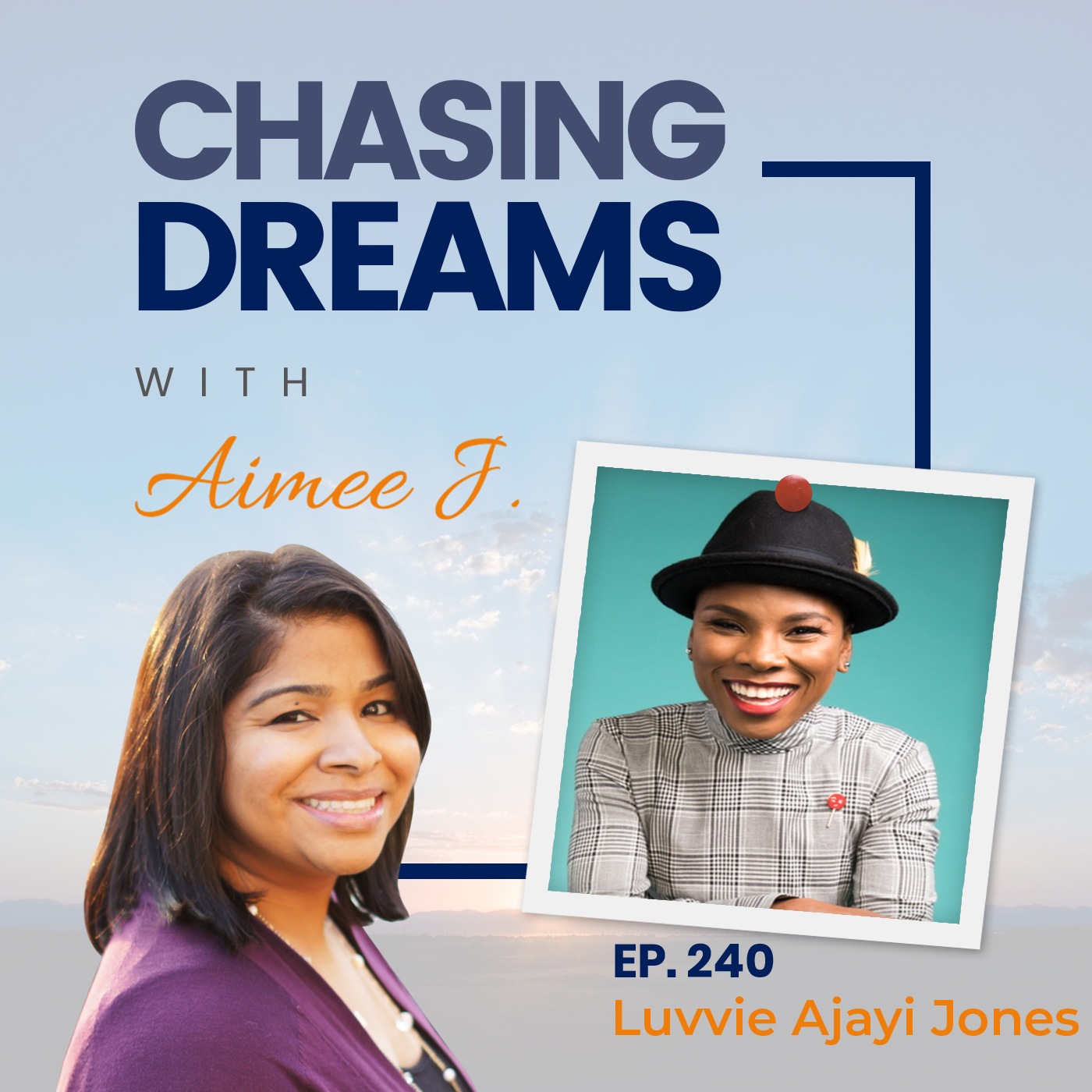