Ep. 132: Ladies of EOTW Events – Coming Together to Celebrate Fandom and Give Back

I’m honored to have four of the six women of End of the World Events with me today for an unusual show. I’ve never had this many guests before! Let’s learn more about these women and what they do.

Michaela Martin grew up in Papua New Guinea, and now lives in rural southeastern Arizona. She, Rachel, and Rory were roommates at a convention for The 100 earlier this year, and started discussing the possibility of creating a US-based event for the show. When she’s not nerding out over TV shows, she enjoys creating art, reading, and generally being creative.

Rachel Walker also grew up in rural Arizona. She recently graduated with a bachelor’s degree in veterinary science, and her daytime job is microbiology research. Even though her future career goal is to become a doctor, she hasn’t let go of her passion for good literature and television. If she’s not doing lab work, she’s probably cuddling her German Shepherd or working on guest contracts for Con-Geda.

Jessie Suarez is a born-and-raised Floridian. She recently spent her final semester abroad in London, before graduating from Florida State University with a BA in Theatre. When she heard of a group of women trying to host a con for The 100 in the US, she jumped at the chance to join. When she's not studying or working, she’s watching TV, singing obnoxiously, or playing with her cat Lilly.

Rory is from Texas, but currently lives in the Los Angeles area. She got her start in the convention and festival circuit almost ten years ago. However, Con-Geda is the first con that she has been involved in since its inception. During their downtime Rory enjoys going to comedy shows, eating tacos, and taking naps.

Sam Makowski hails from Calgary, Canada and was the last member to join the Con-Geda team. Although she started watching The 100 in 2014, it wasn’t until 2016 that she became involved with fandom and developed friendships with others who enjoy the show. Sam’s other interests include chemistry, writing, traveling, and all outdoor activities.

Nicki Murphy, originally from Australia, is currently living in London. Nicki has volunteered at countless cons, and when she heard about Con-Geda, she knew she wanted in on the ground floor. When she’s not handling some of the Con-Geda social media duties or volunteer applications, she’s probably watching documentaries about how our food is killing us, dodging spoilers for her favorite shows, or attending other pop culture conventions.

Have you ever loved a TV show so much that you HAD to be more than a regular viewer? That’s the way these women feel about The 100, a CW show based on the book series by Kass Morgan. They are hosting the Con-Geda fan convention in June 2018 in Los Angeles. They wanted to do this to honor the show and the cast, because they realize that TV and books can help people connect and relate. The response they have received through their Kickstarter campaign has been remarkable. The kicker to all that they have accomplished is that they do this in their “free time,” as a hobby dedicated to a show they all love.

What the Money Goes For:

The ladies have raised this huge amount of money—for what? They share about the behind-the-scenes goings on, that most people aren’t even aware of. Most of the money raised goes to the venue for deposits, rooms, catering, and to pay guests of the convention. There are fees for everything, including ticket sales sites and the website. The unseen aspects of hosting a fan-based convention are unimaginable, but they are happy to undertake this challenge to further the impact of the show as it hits on real-life issues and connects with fans everywhere.

Don’t you want to involve yourself in endeavors that give back and have a deeper purpose? The Ladies of EOTW Events have chosen two charities to connect with their event. The Jasper Jordan Project partners with the Anxiety and Depression Association of America and was actually started by fans of the show to raise awareness from the ignorance in our society around mental health issues. The Battle Scars Project focuses on those who suffer with disability and chronic pain. Many people around us suffer in silence from things we are not even aware of. Both of these projects are tied closely with Con-Geda and showcase the underlying desire to connect and help others.

Guest Recommendation: ONE action for a dream chaser to take—(one from each guest)—

From Rachel: “Go for it. Life is too short to NOT do what interests you. Surround yourself with supportive people and ignore the haters.”

From Michaela: “None of this would’ve been possible without each other. You have to have a team of support.”

From Jessie: “Don’t give up and don’t be your own worst enemy. It’s rewarding to go after what you want.”

From Rory: “Know when to step away. Find something you can go to and escape to when you need it. Take time for YOU and have a healthy outlet.”

The 100 book series by Kass Morgan

TWEET: “We bonded over not having the money to go to the conventions that we wanted to go to.” @chasingdreams

TWEET: “Everyone experiences the pain of mental illness differently, but we aren’t really talking about it.” @chasingdreams 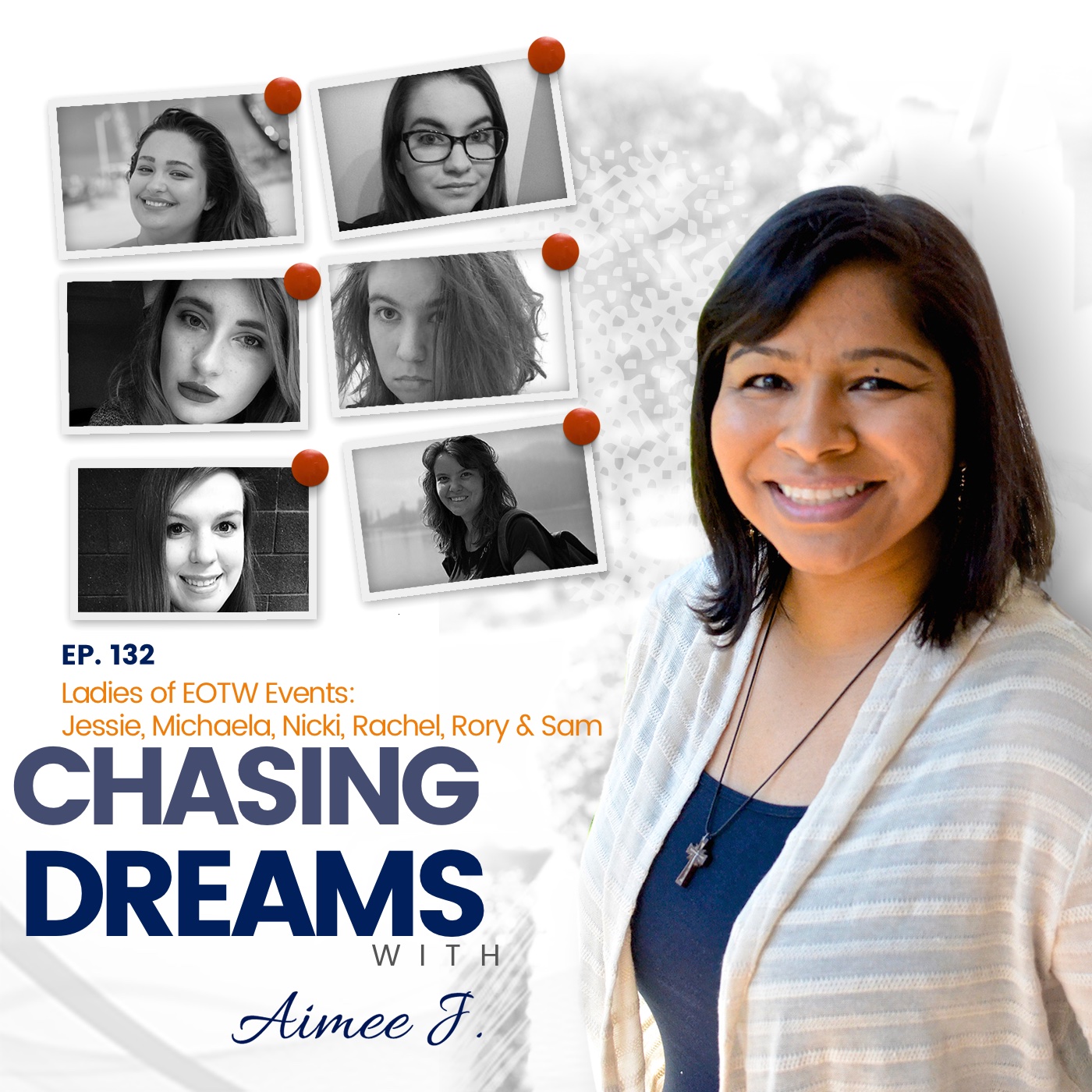