A teenage kid who loved music. He didn’t have the means to pursue formal training or education so he started with what he had. Jay Flame progressed from that point with the tools at hand and has become a very talented artist, rapper, producer, and musician, chasing his dream because he loves it. In this episode of Chasing Dreams you’re going to hear Jay’s story: How he got interested in music, how he pursued it in the lean years, his experience with big names in the hip hop industry, and how the lessons he’s learned have moved him to make music for the joy of it rather than the money. It’s a powerful lesson, so take some time to listen.

TWEET: Musician, artist, and producer who does it for the joy, not the money, today with Jay Flame

If you want to do it, the tools are there. Go for it.

Today’s guest on Chasing Dreams, Jay Flame, is convinced that we live in a day when anything you want to accomplish is possible. The advances in technology and the availability of resources make it possible for you to chase your dreams, whatever they are. His advice?

“If you want to do it, the tools are out there. You have to go for it.” That’s a theme that is very evident not only in Jay’s words but also in his actions. He’s pursued his dream of being a rap artist and producer when he got little to no support from those in the industry. But he pursued it anyway. Jay’s story gives another, refreshing perspective to what success really means. Hear it from his own lips on this episode of Chasing Dreams.

Using what you have to get to where you want.

When Jay Flame was just out of high school he stumbled upon a tool called “MTV music generator,” it was a Playstation game that he first used to start making beats. As he got better with that and felt he needed a few more tools, he went to Best Buy and purchased a $50 software program for his PC computer. In time, he started making some very cool music and moved on from there. Jay’s story illustrates that you can start where you are in pursuing the place you want to be. You don’t have to accept limitations and obstacles. They are there to challenge you, to make you stronger, to test your resolve. Jay has proven that no matter where you are, you can get to where you want to go. His inspiring story is the topic of today’s conversation.

You’ve got to do the work. Figure it out and do it. On this episode with Jay Flame

Reaching his dreams and discovering they were a bit off-center.

When the day came that Jay Flame’s music and production skills were getting noticed by people in the music industry, he was naturally excited. It looked like his dream of commercial success was on the horizon. But his optimism took a hit when some of his material was used by other artists without giving him any credit. He was young and naive so he hadn’t taken the necessary precautions to safeguard his musical creations, so there was nothing he could do. That experience and a few others caused Jay to realize that he was pursuing the wrong thing. Fame, money, and prestige were not what he really wanted. He just wanted to make music for those who wanted to hear it. It gave him joy to bring joy to others. Today Jay’s not aiming at a big time music career at all. He’s content making good music, passing it along to his friends, and letting things roll as they may. His story is refreshing, and it’s right here on this episode.

Pursuing your passion every day, even when it doesn’t pay.

Jay Flame works a full time “regular” job today. But that doesn’t mean that he’s given up on his dream of being a musician and producer. He’s in his home studio most days working on some new line or beat, all because he loves the music and the process of creating it. He’s happy with that arrangement. It enables him to keep his perspective straight, making music because he loves to make music and he loves to delight others with it, not because of any monetary carrot he’s chasing. You can hear how Jay came to that place and why he likes it so much on this episode of Chasing Dreams.

TWEET: Pursuing your passion even when it doesn’t pay, a conversation with Jay Flame

Never give up. If you want to do it, the tools are out there to do it.

CONNECT WITH JAY IN ALL THESE PLACES

I am Jay Flame Links:

TWEET: Never give up. If you want to do it, the tools are out there to accomplish it. ~ Jay Flame

TWEET: “I Am Jay Flame,” a new album from @Iam_jayflame, featured on this episode of #ChasingDreams 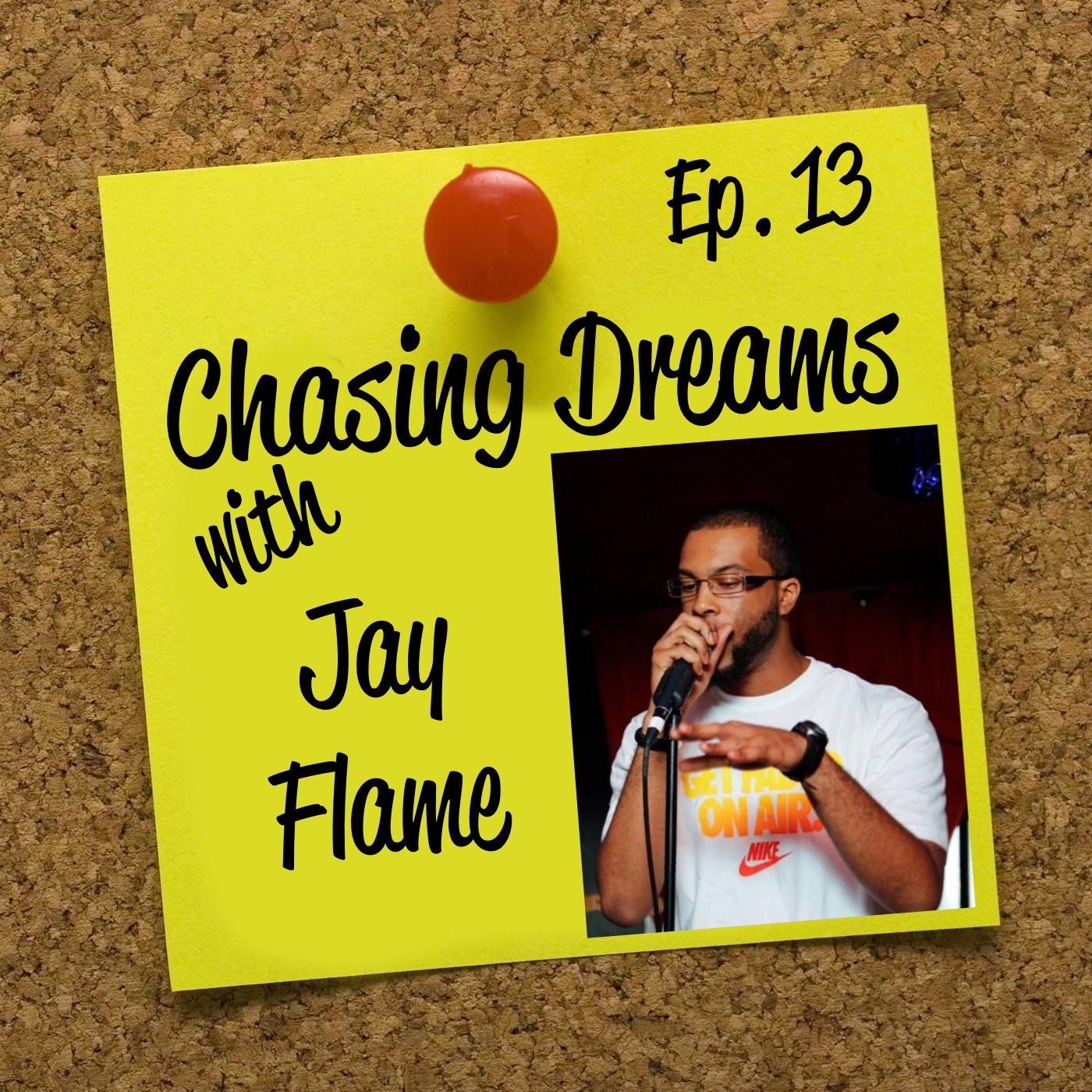