August: Osage County Gives Me a Glimpse at What My Life Could Be

Off the bat, the acting in this movie is great. Everyone brings their A-game. That being said it did not move me one way or the other. What it really did was give me this weird case scenario of “What if this was your life?”.

In the movie, Violet (Meryl Streep) and Beverly (Sam Shepard) have three daughters. When Beverly dies, Barbara (Julia Roberts), Ivy (Julianne Nicholson), and Karen (Juliette Lewish) come back home for the funeral and to help Violet who has mouth cancer and is hooked on prescription drugs.  You never want to think about your parents dying, but this movie did exactly that and more. I found myself having an inner dialog with myself asking questions and coming up with scenarios* like:

Seriously, I could not turn my brain off. Watching the movie was weird in the sense that I felt like I was intruding on a family's private moments but at the same time it is like watching a train wreck and you can't turn away. There are some reveals in the movie that had me squirming in my seat. At the same time, you keep watching because you just do not know how things are going to play out.

To be honest, I'm not sure how I feel about the movie outside of being impressed by the acting caliber. Probably because I could not stop thinking about those what if scenarios. As expected, Meryl Streep and Julia Roberts were amazing, but the actress that I was most impressed with was Julianne Nicholson. Kudos to you ma'am. Your material was not easy but you knocked it out of the park.

I would say overall, this is a movie for rental or Netflix. You do not have to go to the movie theater to watch it.

My take-away: I need to make sure to keep my relationship with my family  on the positive side of things because things get ugly when you let them go sour. If nothing else, this movie had me hug my parents and give my sisters hi-fives when I saw them. 🙂

And why is this movie even called “August: Osage County?”  Yes, I know it is based on a play and I get that it takes place in August and in Osage County but still was there supposed to be more significance to it? I was waiting for some revelation in the film but there was none. I guess I will never know.

*Note: I feel I should mention that my parents are both alive, healthy and happily married (thankfully) and that I get along really well with my sisters. I just let my imagination run wild. 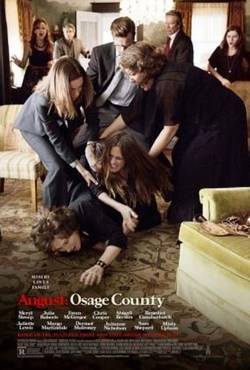